We had a walk into Queenstown for lunch.  Leela had a lovely chicken sandwich and I demolished an English Breakfast.  A few cappuccinos later and we were wide awake.

Took a ride on the Skyline gondola/cable-car up to the top of Bob?s peak.  The views from the top were amazing, looking across Lake Wakatipu and The Remarkables. 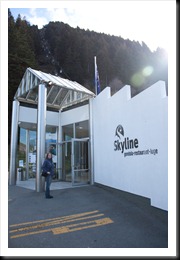 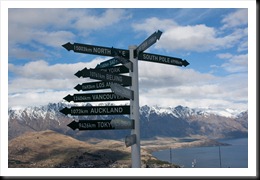 Next, the Luge beckoned!  The Skyline complex has a fantastic Luge course at the top where you can hurtle around the track on small carts.  After seeing an accident on the extreme track with some of the Great Britain winter sports team Leela was a little sceptical but ended up enjoying it too. 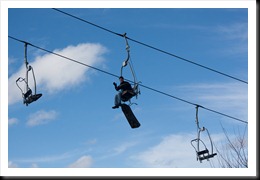 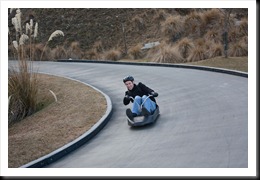 We booked in early for the restaurant and sat writing some postcards, drinking beer & wine to pass the time.  We were called in first to the restaurant and got shown to the best seat in the house.  We had to agree!  We were right in the corner of the restaurant surrounded by the glass windows overlooking the mountains, lake and Queentown.  We spent our meal watching the sun set whilst paragliders and bungie jumpers threw themselves off the mountain. 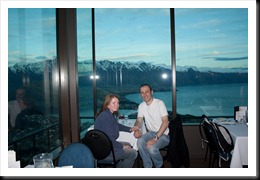 We left Queentown’s lovely weather behind and headed north up the west coast towards Franz Josef.  As with almost every part of NZ, the views of the mountains and ski areas were beautiful.

As we neared Franz Josef the weather started to turn for the worse and rain fell.  Our first port of call was the Fox Glacier, driving down a very slippery road with sheer drops either side and cascading waterfalls almost everywhere we looked.  The glacier was huge and an amazing sight. 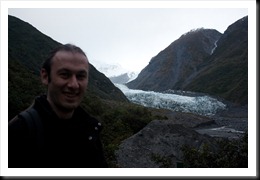 We finally found our campsite for the night and were treated to another free spa to warm up in!

The rain’s really coming down down.  Due to the bad weather the helicopter/hike excursion on the Franz Josef Glacer has been cancelled.  So, we decided to drive up and take a look at the Glacier on our own.  After another journey down a very slippery road towards the glacier car-park we donned our waterproofs and headed out.

After 30 minutes or so we reached the first viewing platform.  From here we could see the glacier in the distance and it didn’t really look that far (famous last words).  A sign told us a return journey to the “terminal point” of the glacier would take around 1 hour 45 mins to walk.  Somehow I managed to convince Leela it’d be fun and set off on a very long, very wet and very windy journey to the glacier.  Crossed over/through a few fast running streams quickly becoming small rivers, climbed over not-small piles of loose rocks and finally made it.  A pretty cool sight (no pun intended!).  Managed to take a few photos and shoot a bit of video whilst trying to keep the rain out of the cameras. 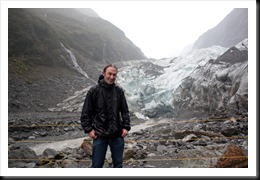 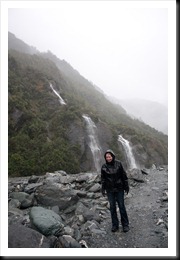 We were totally soaked through so didn’t stay long, but it was worth it.  The walk back to the van seemed to take forever but we were on a mission to get into warm dry clothes again!

Once were were warm and fed we set off on a slow & wet journey up the coast to Greymouth.  Luckily the rain had dried out by the time we reached the campsite so we took a walk down to Monteiths Brewery for a tour and BBQ.  Pulled & drank lots of nice beer and met some nice people. 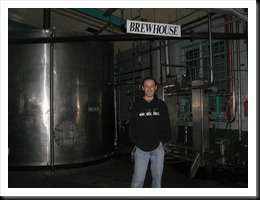 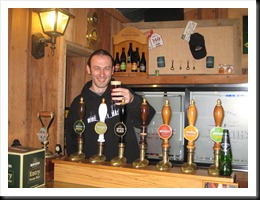 We headed north again up the west coast from Greymouth to Punakiki, to view the Pancake Rocks.  Again the rain was pouring down, so we put on our waterproofs and headed out on a 20 minute coastal walk.  The rock formations were fascinating – The ocean waves have washed away parts of the limestone over the years and have left rock formations that look like stacked pancakes.  Due to the weather we didn’t stay out very long and headed back to the van to get dry again. 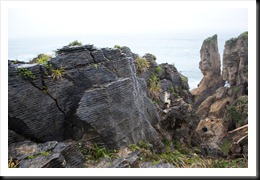 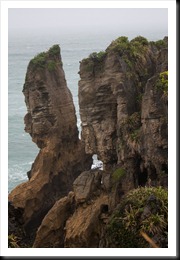 After lunch we headed off over a very wet, windy & foggy Arthurs Pass.  There were waterfalls cascading down the mountains all around us due to the rain.  Around half way through the pass, the sky turned blue and the sun came out for the rest of our journey to Christchurch. 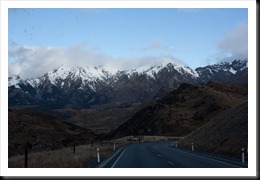 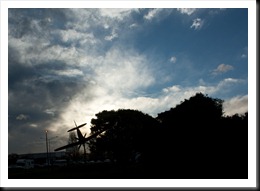 Once again we were treated to a free spa by the campsite which we followed up with a walk to the local take-away.  We ate Sweet & Sour Chicken and Chicken Tikka Massala and washed it down with a nice bottle of wine we picked up from the Drylands Vineyard a couple of weeks ago.

Spent the morning cleaning the van and packing our suitcases as it was our last day in New Zealand :(.  We ate left-overs from last night?s take-away and then headed over to the Antarctic Centre.  Had a fabulous afternoon, we paid extra for a “behind the scenes” pass and got to meet a couple of the penguins, Pedro and Orlando. 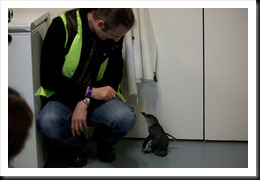 After watching the penguins being fed I went and took a ride on the Hagglund all-terrain vehicle.  The Hagglund took me round a course with huge steep hills, some with crevasses in, around steep banked corners and finally over a 7 meter hill in plunged into a 3 meter deep pool.  We slowly floated across the pool with the vehicle using its tracks as paddles.  Managed to catch it on video too, I’ll see if I can get it on Youtube at some point. 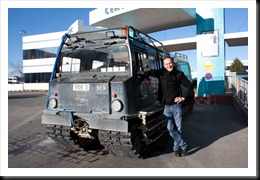 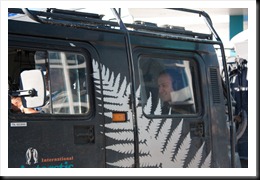 After the ride we went into the Antarctic Storm Room where they simulate the conditions found at the Antarctic.  We put on the overcoats, gloves and shoes provided as the room was currently at 8C.  The room was filled with snow, had an igloo and an ice-slide.  After a few minutes they started a simulation of a wind storm, taking the temperature of the room right down to 34C.  It took a while after that for us to warm up again.

Final day, starting with an early 6:50am wake up call.  A quick clean of the motorhome and we set off at 7:40am to drop it off back at KEA.

Trying to get through customs, a jar or Kiwi jam that Leela bought for her dad was confiscated for being a liquid(!) 30ml over the limit!  Leela ended up buying an alternative present in the airport instead.

12:30pm NZ, 1:23am UK time: We’re on our flight to Singapore.  I’ve started on the beer already to try to help me sleep later.  We’ve finally finished the last batch of thank-you cards and all that’s left to do now is fly home. 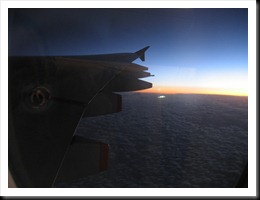 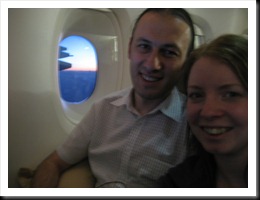 We have now been travelling for 34 hours.  We both managed to get a few hours sleep on the plane, until a child behind Leela turned the spotlight on and started kicking her seat.

Passport control was quite a bit more thorough on our way back in.  Had photos taken this time, also had to remove shoes, belts, jackets, phones etc and walk through the scanner area whilst holding jeans up.  Fun.

In the V bar now, drinking hot chocolate, waiting for our last flight to Newcastle.