We’ve spent approx 12 hours in the air so far flying from Heathrow to Singapore.  The staff, service & food from Singapore Airlines are great. Pity about our sleeping arrangements. 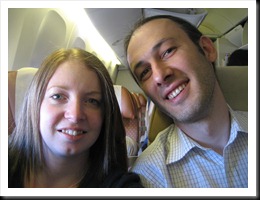 We spent the majority of the “night” trying to get comfortable and getting occasional small amounts of sleep.  I’ve also discovered I suffer from “Barometric Pressure Headaches” when the plane comes in to land.  Not nice in the slightest!

Our hotel, the “Marina Mandarin”, is lovely.  Our room has a nice view over part of the city across towards the marina.

Whilst Leela took a nap to recover from the flight & jet lag, I spent some time on my laptop browsing through the amazing photos that our wedding guests uploaded to our website.  Thanks to everyone that took the time to upload these, they are great!

Today the weather was very hot but overcast, so we decided to venture out to the Chinese and Japanese Gardens.  After working out the MRT system we enjoyed a scenic (and thankfully air-conditioned!) journey out to Jurong.

The Chinese Garden is amazing, we walked up 7 flights of stairs to get to the top of the Pagoda and were rewarded with fantastic views and a nice cool breeze. 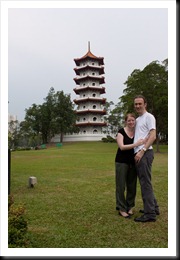 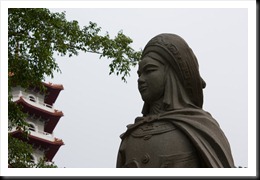 Within the gardens we found what is meant to be the worlds largest collection of turtles at the Live Turtle and Tortoise Museum.  We spent an hour or so here, feeding a massive collection of frenzied turtles which seemed desperate to get a bite of cucumber! 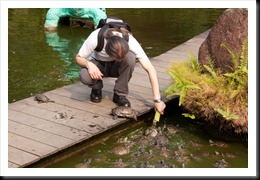 In the evening we decided to go visit the Singapore Night Safari.  On our way to the bus stop, we found some people selling tickets to the Night Safari along with a free bus ride.  Once we accepted the offer and took the bus, we realised this wasn’t an official operation and was obviously run by someone re-selling bulk-bought tickets.  We did get there though, and in one piece!

The safari itself was strange – You’re basically taken around on a bus trip through a zoo, in the dark.  You can’t really see very much while on the bus and the tour guides sound like they’re reading from a very cheesy script.  It seemed lots of emphasis was put on animals we might consider “normal” such as goats and cattle.  Once we left the bus and decided to go walking around on our own we finally got to see some impressive animals close-up including elephants, leopards and lions.

We slept in today and were woken by massive gun salutes being carried out by the Singapore Military practising for National Day.  After applying lots of sun cream we took a walk to the Singapore Flyer, similar to the London Eye but bigger!

We saw some amazing views across Singapore and the harbour, but the most fascinating view was of the grand prix circuit being prepared for the Formula 1 race the following month. 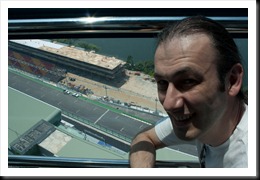 We spent the afternoon in the Hotel Lobby/Atrium eating lunch (mine was a plate of the smallest burgers I’ve ever seen!) and writing thank-you cards while waiting to leave for the Airport and our flight to New Zealand. 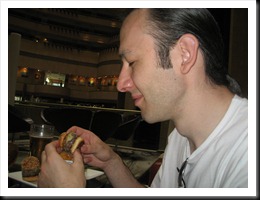 We’re in New Zealand at last!  We arrived early this morning, and after a round of Biosecurity checks on Leela?s hiking boots we were finally allowed to enter!  A driver from Kea Campers arrived to pick us up from the Airport and took us 30 mins north of Auckland to their base and our motor home. 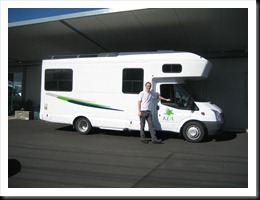 Our Kea Motorhome – Home for the next 3 weeks!

We then drove several hours south of Auckland to Waitomo and our first campsite?