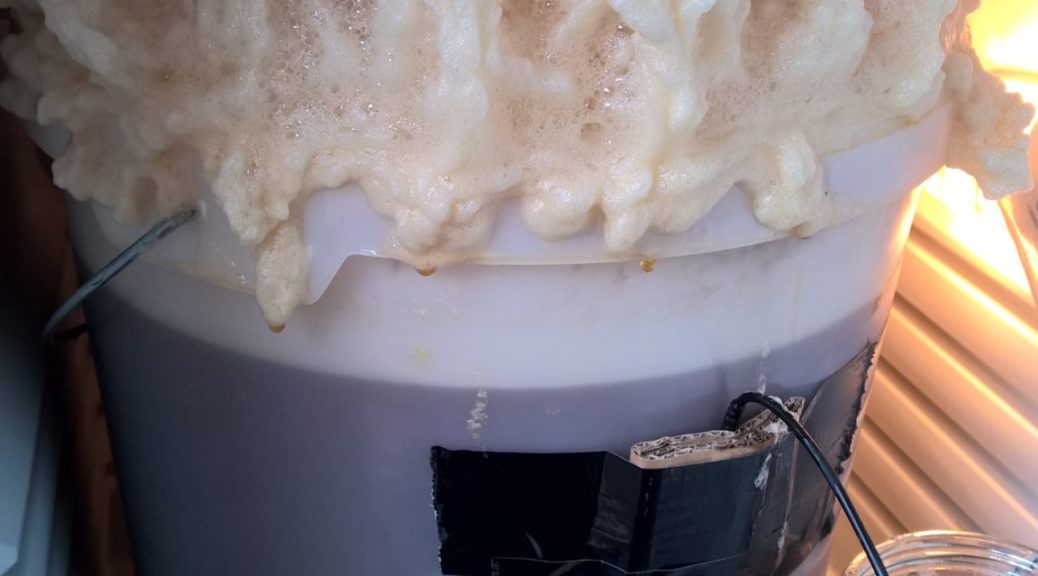 I’ve had a couple of big beers on my to-do list for a while, so with my HERMS system up and running I thought I’d strike one of them off the list:

Adjusting for my kit’s (pre-HERMS) efficiency, I came up with the following recipe:

Considering I had a few issues with calibrating my HERMS temperature on the BBOC Vanilla Porter brew, I thought I’d have everything nailed down this time.  Not so!  It may have been the Rye, it may have been the pump’s power, it may have been the phase of the moon; No matter what I tried, the run off on this brew was just a trickle.  I tried multiple times to get the grain bed unstuck from the manifold, but each time a few minutes would pass then the runoff would slow to a trickle.

After struggling with this for the hour-long mash, I started to very slowly drain into the kettle.  This took so long that only half way through the drain I thought “sod it” and put my sparge water in the mash tun.

The next morning, I discovered a monster in my FermFridge!

The first 24-48 hours were “fun”…  I had to regularly visit the garage to clean up the mess as it spewed out of the fermenter.  No matter what I did, it either blew the lid off, or forced its way out of the grommet holding the blow-off tube in place.

The fermentation died down after a week, and stayed pretty solid at around 1.025 – Still fairly sweet.  Over the weeks since I’ve tried stirring up the yeast bed and adding another packet of US05 without any luck.  However, around the start of November I added a packet of Mangrove Jacks M29 French Saison yeast, which appears to have started drying the beer out!  After 48 hours it was down to 1.020, so this is one to keep my eye on over the next week or so…